The other day, I wanted to get dinner at a local 家常菜, home style Chinese food, restaurant around Sanlitun and learned that the restaurant was no longer there and was replaced by the MIAMI HEAT CLUB. I’m a die hard Bulls fan and I just couldn’t stand that my favorite Chinese food joint was taken over by this club located right by D-Lounge and Salsa Caribe. But this comes to a simple conclusion that NBA does sell in China but will most likely follow the footsteps of OBAMA CLUB in Shanghai.

Congratulations. You finally made it to the middle kingdom and climbed the Great Wall of China, which was on the top of your To-Do list in China. At Mutianyu Great Wall, which is becoming much more popular for foreign tourists(i.e. the newly installed Subway sandwich at the entrance of the wall),  you can easily make your way up to the top of the wall in thirty minutes if you’re in shape and roughly one hour if you like to pace yourself and absorb every step up. I’ve been fortunate enough to have enough visitors in Beijing to climb this portion of the wall four times in the last year. It amazes me that every time I go, I run into the same vendors whom are farmers from the region and make a living by selling second-hand drinks and food for five to six times the original price. They climb this wall every day at sunrise and climb down at sunset. They say that they are not registered with the city nor the Great Wall and told me that “It’s not easy to make a living out here nowadays and so we have to be creative”. They told me that they mainly target French tourists who they say are the easiest and most curious customers who are willing to have a conversation with them at the top of the wall. The younger sister of  the vendor is practicing her French along with her English. It’s interesting to get away from the city of Beijing and go past the 6th ring road to see that China mostly is still a developing country with most of its people living off of 300USD per year which is roughly one-third of urban areas in China. The country side and people who reside in these regions feel that they have become forgotten being excluded from the main cycle of life and modernity that is taking place in China.

Another observation I have made is the high level communication for business that surrounds the Great Wall. At Dongzhimen Long Distance bus station(located in Beijing city central), I say that a majority of foreigners are headed towards the Great Wall(either Mutianyu or Jinshanling). These tourists are here since they are going on their own to avoid being with a tour group. At this terminal, are countryside farmers who come out to the city early in the morning and annoyingly follow/”guide” foreigners to the great wall. Trust me, they have a sharp eye for who is a foreigner and who is not.  Once the foreign tourists give in and are on the bus to the wall, these farmer “guides” start making calls to their black cab drivers on arrival times and who to expect. Since I speak a bit of mandarin, these “guides” were communicating my background and China knowledge etc. When we got off the bus, sure enough there was three to four black cab drivers who share the same network with the old lady to discuss plans and prices. Since getting to Jinshanling Great Wall is a bit tricky, you have to ride a black cab  if you are going on your own. The locals know this and this new process and networking by working together  seems to be really helping the local farmers in the region to make some extra cash. The black cabs can range from 300-700 RMB round trip depending on how much you can negotiate and how much you are willing to pay.

One of the many advantages of living in Asia is the variety of food to choose from. In the variety of food is also a variety of combinations you can come up with when you decide to eat Malatang.  Of the many options I have seen that being: shrimp, fish balls, tofu, bean curd, lotus root, mushrooms, chicken, beef tendon, and noodles seem to be the malatang all-stars and much more get cooked in a pot of steaming broth laced with Sichuan peppers and sesame oil. Prices can rage from simple snacks(3RMB) to a full dinner (15RMB). My favorite out of many in Beijing is this joint located in Dongsiliutiao Hutong. It’s a nice place to mingle with locals and the owner, Mrs. Ma, who is originally from Sichuan has been cooking up Malatang for almost 2 decades. If you like your food real spicy then it is definitely worth a try when you’re in China. 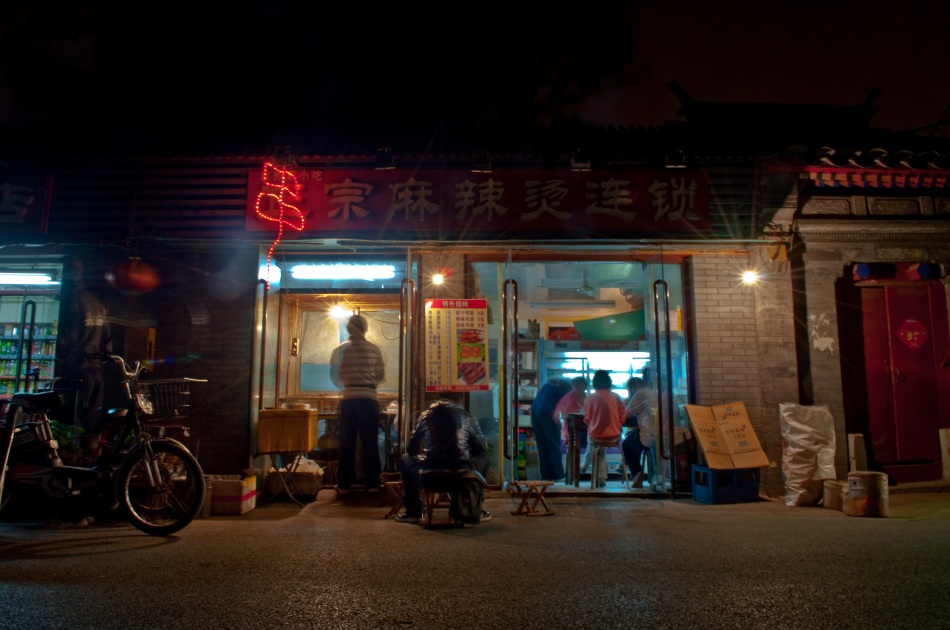