Congratulations. You finally made it to the middle kingdom and climbed the Great Wall of China, which was on the top of your To-Do list in China. At Mutianyu Great Wall, which is becoming much more popular for foreign tourists(i.e. the newly installed Subway sandwich at the entrance of the wall),  you can easily make your way up to the top of the wall in thirty minutes if you’re in shape and roughly one hour if you like to pace yourself and absorb every step up. I’ve been fortunate enough to have enough visitors in Beijing to climb this portion of the wall four times in the last year. It amazes me that every time I go, I run into the same vendors whom are farmers from the region and make a living by selling second-hand drinks and food for five to six times the original price. They climb this wall every day at sunrise and climb down at sunset. They say that they are not registered with the city nor the Great Wall and told me that “It’s not easy to make a living out here nowadays and so we have to be creative”. They told me that they mainly target French tourists who they say are the easiest and most curious customers who are willing to have a conversation with them at the top of the wall. The younger sister of  the vendor is practicing her French along with her English. It’s interesting to get away from the city of Beijing and go past the 6th ring road to see that China mostly is still a developing country with most of its people living off of 300USD per year which is roughly one-third of urban areas in China. The country side and people who reside in these regions feel that they have become forgotten being excluded from the main cycle of life and modernity that is taking place in China.

Another observation I have made is the high level communication for business that surrounds the Great Wall. At Dongzhimen Long Distance bus station(located in Beijing city central), I say that a majority of foreigners are headed towards the Great Wall(either Mutianyu or Jinshanling). These tourists are here since they are going on their own to avoid being with a tour group. At this terminal, are countryside farmers who come out to the city early in the morning and annoyingly follow/”guide” foreigners to the great wall. Trust me, they have a sharp eye for who is a foreigner and who is not.  Once the foreign tourists give in and are on the bus to the wall, these farmer “guides” start making calls to their black cab drivers on arrival times and who to expect. Since I speak a bit of mandarin, these “guides” were communicating my background and China knowledge etc. When we got off the bus, sure enough there was three to four black cab drivers who share the same network with the old lady to discuss plans and prices. Since getting to Jinshanling Great Wall is a bit tricky, you have to ride a black cab  if you are going on your own. The locals know this and this new process and networking by working together  seems to be really helping the local farmers in the region to make some extra cash. The black cabs can range from 300-700 RMB round trip depending on how much you can negotiate and how much you are willing to pay. 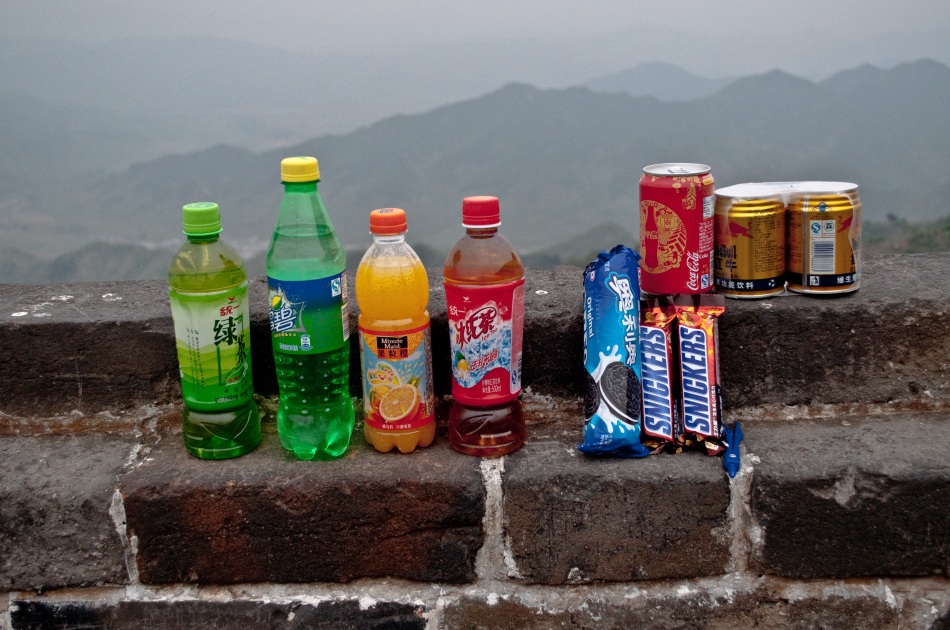 China’s online population is already the world’s largest and is continuing to expand with a year on year increase of 40%+.  This is just my observation but when comparing Tokyo JR Yamanote subway Line and Beijing Subway Line 1(the busiest public transportation means for both countries) during morning rush hours, I rarely see people in Beijing glancing over the printed newspaper as much as I would see in Tokyo. It seems like a majority of people in Beijing prefer means of internet to surf the news. Again, the demographics on who takes the subway in Beijing is different from that of Tokyo. We also can’t overlook the difference in the cost of living between Japan and China as a majority of people in Japan will take the subway for its efficiency and low cost as opposed to  in China where income gap is on a larger scale, most high income people in Beijing will unlikely take the 2RMB(about 30US cents) subway ride to work but rather get stuck in the world’s busiest roads just because they can afford a car.

Wired in. Photo taken at Hutong in Gulou.

[Modernity] How the new Census in China will affect Migrant Workers

We all know that China is the world’s most populous country but when we ask how many people are actually in China, even government officials in China have a hard time answering. So what does China do? China is currently experiencing a once in a decade census where for two weeks, 6 million census workers are knocking on each and every door asking for household information. But with an estimated 1.3347 billion people and counting, it’s not an easy task. For the census workers, by far the largest challenge will be counting and obtaining the information of the countrie’s migrant workers. 2009 data suggests an estimated 211 million migrant workers in all of China. Compassion for Migrant Children‘s data shows that about one-third of the population in Beijing are migrant workers.
How is this problematic? Before this year, the census was carried out depending on the individual’s hukou, household registration at birth. But starting this year, census is now based on where you now reside. But most migrant workers who come to urban cities like Beijing for higher wages don’t have the official capacity to reside in Beijing lacking proper paper work which is hard to obtain. Without proper documentation, migrant workers and their family members are denied access from public education and basic healthcare in Beijing. One could say that the backbone of rapid urbanization in China are the migrant worker’s hard labor. But with no proper documentation and some families illegally having more than one child, migrant worker’s families face a hard decision as census workers are coming around knocking door to door. If caught with  having more than one child, they will be fined and perhaps even be deported back to their home towns.
Even in my apartment building I felt suspicious that the non-Beijing accented workers are always going to the 14th floor of my building. With ever-rising housing costs, I found out that 20-30 migrant workers were sharing a 2 bedroom apartment. With this current reality of migrant workers it will be interesting to see how the census turns out as the counting closes in a week.

The backbone of China's rapid urbanization, a migrant worker continues labor even late at night.

This construction site began in early July and they have built this much already.

I ran across a great TED Talk from former US Diplomat and Harvard Kennedy School of Government dean, Joseph Nye.

Some topics he discussed in his talk were:

Power Transition Vs. Power Diffusion
Not rise of asia, but the Return of Asia. Power shift to Asia.
China passing US economy in 2027(projected by Goldman Sachs) isn’t a percapita measurement hence, one dimentional overlooking the complex issues.
Asia is not one thing. View of rise of China is different depending on where you are in Asia.
“We(US) don’t have to fear the rise of China, as long as we we have policies to manage this change”
Power is multipolar – US, EU, China, and Japan can balance each other
Soft power is becoming more and more important.
How do we work together create global public goods on positive sum but not zero sum?

I think Dr. Nye did a great job analyzing power from many different perspectives in the 15minutes that he presented. It’s correct, China may surpass the US in terms of GDP by 2027 as China has already passed Japan this year but you have to look at economic power from the per capita perspective. According to World Bank data, it still takes on average  13 Chinese citizens to produce as much as one Japanese citizens GDP.

But I really liked how he said  mutual cooperation and understanding each countries national interest as well as creating a positive gain, will be a key to creating smart power. A very optimistic but an inspiring 15minutes.

This is oldnews and everyone knew that it was going to happen. But I guess its finally official now after on Monday, the Japanese government reported the official numbers. I think from all the readings I’ve done in the past week, this paragraph from Cornell Professor, Eswar Prasad sums it up very well:

There are virtually no historical parallels for a country that is so large and dominant in absolute terms and yet that lags far behind many other countries in terms of per capita income and other indicators of development. There is still a yawning gap in per capita income levels between China and the advanced economies and, even at present growth trajectories, it will take a generation for China to achieve the level of development of advanced economies.

But interesting enough it’s the same old Beijing and its not like people here are celebrating or anything.

View of Guomao from Shuangjing